Canada is buzzing after the legalization of recreational cannabis, with long lines at the few retailers already open, a supply shortage, impaired driving fears, people taking to the streets in joy …

But what does legalization mean for the Canadian economy? How much is the market potentially worth?

“The federal legalization of both medical and recreational cannabis has positioned Canada to be the global leader of this new emerging industry on both fronts and provides significant economic opportunity, as Canadian firms are leading funding of this industry worldwide,” said Aras Azadian, CEO of the Canadian cannabidiol biotech Avicanna.

Estimates from the Canadian Imperial Bank of Commerce indicate the legal cannabis market will be worth $6.5 billion by 2020.

On a longer time horizon, New Frontier Data projects the domestic legal cannabis market will reach $6 billion by 2025, up from $1.3 billion in 2018.

“Legalization will result in a boost to local economies and instigate job creation,” said Jeff Siegel, managing editor of Green Chip Stocks. “There’s no doubt about this. We’ve already seen evidence of this in the medicinal cannabis space in Canada as well as over the past year or so as the country has been gearing up for legalization.”

If the legal cannabis indeed reaches $6.5 billion by 2020, it would outpace Canadian spending on alcohol, Siegel said.

“With 43 percent of the Canadian population having tried cannabis and with it becoming more mainstream, it could be a big windfall for Canadian economy. But some products will be phased in over time, so the revenue stream will be gradual. Its potential is in the tens of billions of dollars.”

Green Chip Stocks’ Siegel expects countries such as the U.S. and Mexico to follow suit with legalization in the next 10 years.

“The value of the Canadian market is likely going to be much higher today than it will be in 10 years, when exports won’t be paramount to the viability of non-Canadian markets and capital will be able to flow into markets outside of Canada. At some point, the Canadian cannabis market will reach a plateau and level out. But in the meantime, the value of the Canadian cannabis market today should not be trivialized. This is an incredibly lucrative market,” he said.

Arcview Market Research and BDS Analytics are optimistic as well. In their latest “State of Legal Marijuana Markets” report, the firms estimate sales of $5.4 billion by 2022, with Canada capturing 17 percent of total global legal consumption. 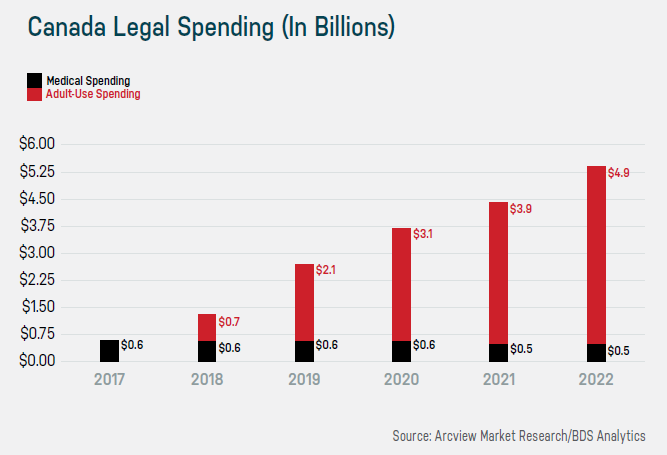 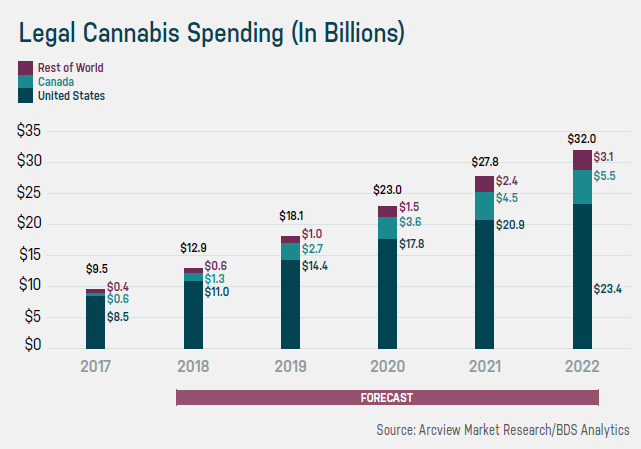 The six U.S. states with functional adult-use cannabis markets point to shrinking illicit sales and teenage use, he said.

“A legal market will also generate a tax windfall with few negative effects on public health and safety. This impact is likely to encourage other countries to move toward legalization at a more rapid pace.”