Here’s your complete guide to investing in Canadian marijuana stocks. Marijuana stocks have become a hot commodity over the last couple of years. And there’s one country above all where the stocks are the hottest: Canada.

Overview of the Canadian marijuana market

The first thing for investors to know is that there are two Canadian marijuana markets: medical marijuana and recreational marijuana. Canada legalized medical marijuana in 2001. However, the then-current regulations were geared toward patients growing marijuana for their own medical use.

The MMPR didn’t stay in effect for very long. In February 2016, a Canadian federal court ruled that the regulations were unconstitutional because they prohibited Canadians from growing medical marijuana at home. As a result, yet another set of regulations was passed, Access to Cannabis for Medical Purposes Regulations (ACMPR), which retained the licensed producers but also allowed individuals to grow medical marijuana at home. The ACMPR went into effect in August 2016.

Not all types of recreational marijuana will be permitted beginning in October 2018, though. The rules permit the legal sale and use of dried cannabis, cannabis oil, and cannabis seeds. However, cannabis edibles and cannabis concentrates used for vaping were excluded — at least temporarily. Health Canada, the federal agency in Canada responsible for public health, felt that more time was needed to develop regulations for these types of cannabis products. Finalization of these regulations is expected sometime in 2019. 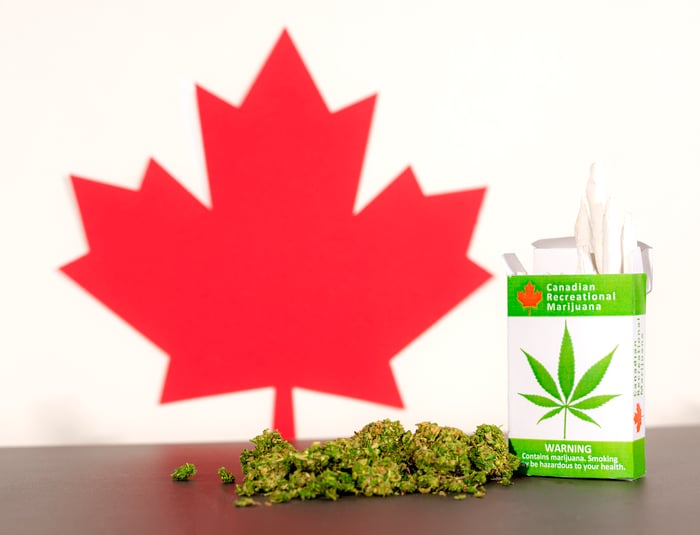 The number of patients receiving medical marijuana in Canada increased quickly to nearly 270,000 in 2017. This figure is expected to grow to more than 285,000 patients in 2018.

As a result, medical marijuana has become a relatively large business in Canada. Last year, total sales were estimated to be around $600 million. However, it seems likely that medical marijuana sales won’t continue to increase very much and could even taper off somewhat as Canada’s legal recreational marijuana market opens.

Although the Canadian marijuana market really began to blossom in 2013, raising money was a challenge for some marijuana-related businesses. Most banks wouldn’t touch marijuana growers with a 10-foot pole because of concerns that they could be penalized for doing so. This left marijuana growers with limited options for obtaining the capital needed to fund expansion.

One alternative used by many marijuana growers was bought-deal financing, a type of stock offering where an underwriter commits to buy all of the stock being offered. These deals also often included warrants and convertible debentures — loans that can be converted later to stock. Some companies also were able to secure loans from credit unions.

Bank of Montreal (BMO) cracked the door open somewhat, though, earlier this year with its capital-markets business leading a round of equity financing for Canopy Growth. BMO CEO Darryl White called Canopy “a bona-fide business operating within the boundaries of the law.” He also raised the possibility that BMO could do similar transactions with other marijuana businesses as long as they met the bank’s criteria for such deals.

But it took the passage of the Cannabis Act in July to really throw the doors open for banks to work with the Canadian marijuana industry. BMO again led the charge soon after the law was passed by agreeing to a major debt facility for Aurora Cannabis(NASDAQOTH:ACBFF).

Threats to the Canadian marijuana industry

Raising capital could continue to be problematic for some members of the Canadian marijuana industry. Although banks will be more amenable to doing business with the major marijuana growers, it could be a different story for smaller players.

There’s also a lingering threat from the way that some marijuana businesses structured their bought-deal financing in the past. Companies that heavily used convertible debentures — loans issued that can be converted into stock — could face a ticking time bomb. If investors convert those debentures to stock, companies could experience significant dilution in the value of existing shares.

Probably the most worrisome threat for the Canadian marijuana industry, though, is the possibility of a supply glut within a few years. Marijuana growers have scrambled to increase their production capacity in anticipation of tremendous demand once the recreational marijuana market opens. The problem is that the top five Canadian marijuana growers alone are on track to have annual production capacity within the next couple of years that is much greater than even the most optimistic demand projections.

This prospect has led some in the Canadian marijuana industry to predict a “squeeze” scenario. As supply catches up to and surpasses demand, the laws of supply and demand dictate that prices will fall. Marijuana growers with higher production costs would likely struggle in this scenario. A natural consequence would be a wave of consolidation within the industry as smaller players are gobbled up at bargain prices by larger marijuana growers.

These problems could be exacerbated if growth in the Canadian recreational marijuana market isn’t as strong as expected. One potential way that growth could fall short of projections is if the Canadian government doesn’t finalize regulations for cannabis edibles and concentrates next year.

Future of the Canadian marijuana industry

While the total marijuana market in Canada is likely to increase rapidly over the next several years, the real future of the Canadian marijuana industry is probably going to focus on other countries. Several of the leading Canadian marijuana growers are already forming partnerships and establishing operations in Europe, Australia, and South America.

Germany is currently the biggest and most important marijuana market outside of North America. The country claims the largest population in the European Union. Germany legalized medical marijuana last year. Most of the largest Canadian marijuana growers now have subsidiaries in Germany or partnerships with German medical cannabis distributors.

Arcview Market Research and BDS Analytics project that the global medical marijuana excluding Canada and the U.S. will total $3.1 billion by 2022. Over time, though, this market could increase well above that amount. BDS Analytics CEO Roy Bingham thinks that the global cannabis market will top $100 billion over the long run even without any movement in Asia to legalize marijuana.

But the biggest wild card for the Canadian marijuana industry is what happens with the country’s neighbor to the south. The United States still has federal laws in place that outlaw the use and sale of marijuana. However, medical marijuana is now legal in 30 states plus the District of Columbia. Nine states plus D.C. have legalized recreational marijuana. And those numbers are likely to increase, as four other states will vote on the legalization of either medical or recreational marijuana in November.

The major Canadian marijuana growers are staying away from the U.S. for now. All of the largest marijuana businesses have their stocks listed on the Toronto Stock Exchange, which prohibits members from establishing operations in any jurisdiction where marijuana is illegal at the federal level.

However, the possibility exists that the U.S. could change its laws. Sen. Cory Gardner, a Republican whose home state of Colorado allows the legal use of medical and recreational marijuana, is promoting a bipartisan bill that would prevent the federal government from interfering in states that have legalized marijuana. President Trump has indicated that he will likely support this legislation.

Should laws change in a way that allows Canadian marijuana growers to expand into the U.S., the future of the industry could be very bright indeed. The projected U.S. cannabis market in 2022 is nearly three times the size of the combined marijuana market in the rest of the world, including Canada.

There are three primary approaches for investing in Canadian marijuana stocks:

“Pure play” marijuana stocks are those of companies that derive all or nearly all of their revenue from the cannabis industry. Investing in these stocks comes with significant risk because of the threats mentioned earlier. However, the stocks also have the potential for nice returns — especially if global marijuana markets open up more quickly than expected.

For investors wanting to dip their toes into the Canadian marijuana industry without taking on quite as much risk, buying stocks of companies that have ties to the industry but aren’t in it directly is an alternative. Perhaps the best example of this type of stock right now is Constellation Brands (NYSE:STZ). Although Constellation Brands is a large alcoholic beverage company, it has a presence in the cannabis industry thanks to its multibillion-dollar investment in Canopy Growth.

Companies like Constellation Brands see an opportunity to create a new class of cannabis-infused beverages. Constellation and Canopy, for example, plan to develop a wide variety of low-calorie drinks mixed with different cannabinoids. Some of these drinks would be nutraceutical products containing cannabidiol (CBD), which has some medical benefits but isn’t psychoactive. Even beverage giant Coca-Cola is reportedly interested in developing CBD-infused beverages for relief of cramping, inflammation, and pain.

ETFs provide a way for investors to buy a basket of marijuana stocks. Buying an ETF offers the ability for investors to spread their risk across a large number of stocks. However, the downside of ETFs are that they charge annual fees that investors don’t have to pay when buying individual stocks. There are currently two primary marijuana-focused ETFs that have holdings consisting largely of Canadian marijuana stocks: Horizons Marijuana Life Sciences ETF and ETFMG Alternative Harvest ETF.